Beer was one of the first things taken from my menu when I first went gluten-free (GF.) Many years passed before a friend of mine thoughtfully bought me a six-pack of GF beer that was made from sorghum. It tasted like Keystone Light. In other words, it was swill. Years passed again until only a few weeks ago, where I found myself in a local Portland brewery that served a fantastic GF pale ale (more on this later.)
At first, I wasn't sure that I would still have the palate for beer, but it turns out, it's like riding a bicycle. And once I opened the door, the craving for beer came washing in. I didn't want to be chained to a brew pub, so I decided to see what the local grocer was carrying. Not much, it turns out. At least, not if you're looking for a decent beer and not a close rendition of domestic pee-juice.
The other issue about buying GF beer is the sticker shock. Many bottles of what looked like decent beer were outrageously priced. I decided to consult an expert and called for the beer master who managed that section of the grocery store.
The manager guided me to a single beer, which she said was absolutely amazing. Keeping an open mind, and swallowing back my sticker shock (over $6 for sixteen ounces!) I decided to go for it.
Introducing Green's GF Dubble Dark Ale, a delicious, creamy glass of beer-heaven with notes of caramel, molasses, and orange zest. 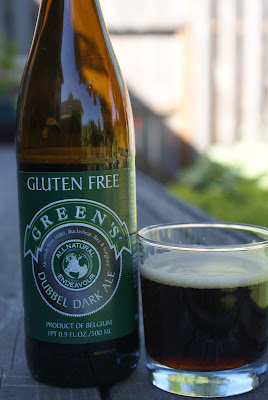 I enjoyed this smooth, frothy brew while reading a book and relaxing in my hammock. It was  satisfying enough to quell my beer craving...at least for the time being. Did I think it was worth the price? Absolutely! I'm now on the hunt for other beers brewed by Greens. I'll let you know when I try them.
Green's is from the UK, and may be hard to find at your typical grocery store. Fortunately, Green's provides access to their distributor through their website, who in turn provides a list of grocery stores and restaurants that carry Green's beers. If you want to find Green's in your part of the world, scroll back up to the hyperlink and simply click it.
As always, I'm glad to be sharing my knowledge with you. Be well, and keep Eating Friendly.